We were thrilled to discover that Babette has been nominated by the British Jewellers Association as ‘Designer of the Year’. It is such a wonderful honour for this their 125th Anniversary award celebrations.

Please follow the link below and vote for us! It only takes a few seconds… 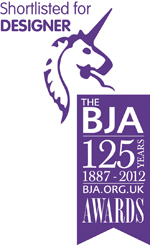